Curt Walters is the best known living painter of Grand Canyon. Art of the West magazine declared the “Greatest Living Grand Canyon Artist” in 1997, and “One of “Eight True Masters” in 2007. Curt makes his home in Sedona, Arizona. In May 2011, Southwest Art named Walters as one of the Forty Prominent People in the Western Art World.  The artist was born in New Mexico, and raised in the Four Corners area of the state, where he acquired and developed his eye for dramatic landscapes. He attended Farmington High School and the San Juan Campus of New Mexico State University.  In 1974, Curt moved to Taos, NM and began working and studying with artists of the Central Valley, including the well known landscape painter Wilson Hurley. In 1977, Curt won the John F. and Anna Lee Stacey Scholarship Award, and due to growing interest after the award, Curt was contacted by Ted and Christine Mollring, the owners of Trailside Galleries. They began showing his work in both the Jackson, Wyoming and Scottsdale, Arizona locations. The relationship continues with the gallery, as Curt still shows his work with Trailside today. Curt’s move to Sedona was prompted by both his representation at Trailside, and because of the proximity to the Grand Canyon. Once settled in Arizona, Curt was given his first national coverage in 1980, through American Artist Magazine. Stephen Doherty, the young editor at the time, has played a great role in covering Curt’s career ever since. 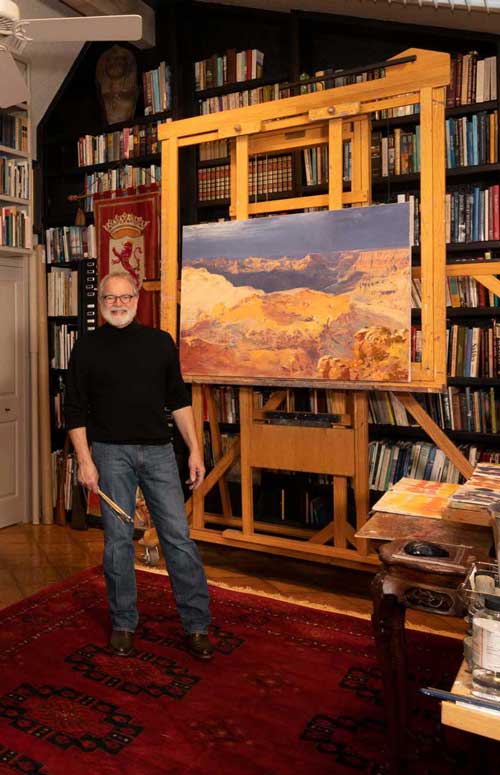 Throughout the 1980’s Curt navigated through various styles and periods of experimentation. He toyed with diverse approaches, working in a pointillist technique 1981-1983, then moving to large textural plein air work around mid-decade. That, then, gave way  to a soft-gossamer period. Therefore that decade was the period which brought Curt into maturity as an artist. In 1989, Sedona Arts Center gave Curt his first one-man show in Sedona, focused on his plein air paintings of Oak Creek. In 1990 Curt shifted into a heavily textured period which found him creating canvases thick with impasto and utilizing intense colors. Curt, at this time, was deeply influenced by his own inner emotions, probably more than in any other period of his life. Throughout the 1990’s Curt  consciously made an effort to go outside every day and paint, as Curt understood that the artist finds their voice painting from life.

One of the most unusual honors for Curt came in 1987, when a street in an Albuquerque, New Mexico subdivision was named “Curt Walters Court.” Curt was nominated for this local honor by Leona Turner, an artist and gallery owner from Albuquerque with whom Curt had studied portrait painting starting at the age of 23.  An out of the ordinary recognition, perhaps, but it demonstrated that there was still a direct tie for Curt to his home state of New Mexico, and its artists and galleries.

The 1990’s were a time of great art adventures for Curt, beginning with his first trip to Paris, in 1990. Curt feels that traveling while painting has broadened the scope of his work, and his knowledge about art. Many career highlights occurred for Curt in the following decade, including several one-man shows at Trailside Galleries in Scottsdale and Carmel, at The Jones Gallery in La Jolla, CA, and at Linda McAdoo Gallery and Altermann Galleries in Santa Fe. Curt was recognized in the 1990’s by being invited to his first prestigious museum shows, including Artists of America and Prix de West Invitational at the National Cowboy Museum. Curt’s first major award was the Buyer’s Choice at his first Prix de West, in 1998. This was followed by two additional Buyer’s Choice awards in 1999 at the Autry Masters Invitational in Los Angeles, and at the Artist of America in Denver.

Philanthropy and The Environment

It was also during the 1990’s that Curt’s paintings started to reflect his environmental concerns with regard to Grand Canyon. Walters’ reverence for the Grand Canyon is not only documented through his body of art, but also in his dedication to preserving Arizona’s National Treasure. The Grand Canyon Trust offered Curt a way to focus his energy and skill for the conservation of Grand Canyon and the Colorado Plateau. Memorably, in  September, 1999 Curt and the Trust organized an expedition where he led fourteen of his contemporaries on a ten-day painting journey down the Colorado River. Several paintings from this trip were sold at the Forbes Magazine Galleries, in New York and San Francisco, as a fundraiser for the Grand Canyon Trust. He has also served as Board Member for The Grand Canyon Foundation.

The Shows and Events

At  Prix de West Walters has been honored with the Nona Jean Hulsey Buyer’s Choice Award  in 1998, 2002, 2011, 2013, 2017 and 2019 giving him a uniqe honor of winning this award in the history of the show. Walters also won Frederic Remington Award back to back in 2004 and 2005, in 2007 he was elated with a double win: Buyers’ Choice Award for “Ra’s Domain,” and the Prix de West Purchase Award for “Spring’s Caprice,” which now hangs in the museum’s permanent collection. Another double win was in 2013 with the Frederic Remington Award and Nona Jean Hulsey Buyers’ Choice Award for “First Touch of Winter” a painting of snowy Sedona.

At the 2008 Masters of the American West, at the Autry Museum, Curt was honored with the James R. Parks Trustee’s Purchase Award  for “Splendid Turmoil.”

At the Quest for the West, at the Eiteljorg Museum in Indianapolis, Walters has received multiple awards, including the Best Overall Presentation Award his first year, three Buyer’s Choice Awards, two Henry Farny Painting Awards, and the Artist of Distinction Award with its accompanying one-person exhibition Monuments and Moments: The Plein-Aire and Studio Paintings of Curt Walters held in conjunction with the 2009 Quest show.

At the 2010 American Masters Show, held at the Salmagundi Club in New York City, Curt won the Buyer’s Choice Award for “Overture to Twilight,” a painting that evidenced the appeal of Grand Canyon as a subject, and Curt as an artist, even with the show being geographically removed from the southwest.

He was also honored with a show in April, 2011 as a Rendezvous artist at the distinguished Gilcrease Museum in Tulsa, Oklahoma. One of the paintings featured in that show (“Winter’s Levity,” 50×80) became part of the museum’s permanent collection. Walters shared the two-person show with friend and sculptor Veryl Goodnight. In May 2011, Southwest Art named Walters as one of the Forty Prominent People in the Western Art World, and stated, “After years of capturing the Grand Canyon on canvas, Walters is unquestionably the best-known contemporary artist to take up the daunting subject.”

In October, 2011, Walters won two awards, The Gold Medal and the Kieckhefer Award for Best of Show for his painting “Sun-Shadow-Wind” at The West Select Show at Phoenix Art Museum, which is now in the permanent collection of the Desert Caballeros Museum in Wickenburg, Arizona.

In June 2016 Walters was honored with a spectacular show “Curt Walters- A Retrospective” at the Museum of Northern Arizona located in Flagstaff, Arizona and featured 32 paintings lent by collectors and museums. The exhibition catalogue was designed and written by Curt’s daughter Miranda Walters (Myss Miranda).

Walters is also well-known for works painted during his travels across the country and abroad. The Colorado Plateau, the Canadian Rockies and the California Coast are among his favorite North American subjects. His travels have also taken him to Bali, Jordan, The Czech Republic, Austria, Hungry, Italy, and Switzerland. In 2010  Walters traveled with Tom Dailey and  his artist friends, John and Terri Moyers, to Normandy, France as guests at the Forbes’ Chateau de Balleroy, built in 1631. Then, traveling to Spain, the artists spent a month exploring Madrid, Cordoba, Granada, Cordoba, Seville, the hilltop village of  Ronda, and Toledo. Many of these paintings by John, Terri and Curt were  included in a three-person show at the Forbes Magazine Galleries, in New York City, in December, 2011. The three artists again painted together on a 2013 trip along the southern coast of England, Vienna and Venice. Most of Curt’s work from that painting trip were seen in a one-man show at Nedra Matteucci Gallery in Santa Fe called Works from my Wish List.

A Lifetime of Art

Curt Walters began 2014 on a high note, receiving the Lifetime Achievement Award from the Desert Caballeros Museum in Wickenburg, Arizona. In the fall of 2014 Curt, John and Terri, and Tom spent  ten days painting in Venice followed by a month in  Spain, where Curt toured and painted the cities of the conquistadors, while searching for replicas of 16th century armor and accoutrement. 2015 found Curt subsequently submerged in the studying and sketching and painting of images related to the 16th century conquistador expedition into the southwest, led by Francisco Vázquez de Coronado.

The first half of 2016, Curt spent a great deal of time preparing lectures based on his techniques and adventures while painting Grand Canyon for the “Grand Canyon Exhibition” at the Eiteljorg Museum in Indianapolis. For this exhibition Curt did a large conte drawing of Cardenas as he first sets his eyes on Grand Canyon in 1540.

Curt was a featured speaker in March 2017, at the Tucson Plein Air Convention. In his introduction to an audience of 1200, Eric Rhodes declared that Curt Walters paintings of Grand Canyon rival Thomas Moran in quality and quantity.

Walters spoke again to a full house when he was a featured speaker in April 2018, at the Tacoma Museum of Art. Walters is very fortunate to have his work included in the Haub Family Collection of Western Art.

Capturing It On Film

A documentary, Painting the Air: The Life and Art of Curt Walters, a film created by Myss Miranda and Rainmaker Productions, made its  premiere at the Sedona International Film Festival during their 25th Anniversary Celebration in February 2018.  Created and edited by Myss Miranda Walters, the film was narrated by Curt giving insight to his live story and emotions which directed and reflect in his art. With three packed house public showings, the film ranked as the 6th most popular out of the 28 documentaries submitted in the short documentary category during the run of the festival. This was Myss Miranda’s first documentary and first film festival submission. Curt congratulates Myss Miranda, and thanks the Sedona International Film Festival.

Walters paintings can be seen at the Claggett Rey Galleries in Edwards, Colorado and at the Nedra Matteucci Galleries in Santa Fe, New Mexico.

error: Content is protected !!
©2021 | Designed and Developed by The Myss Miranda Agency