Twenty-four years after his first appearance at the Prix de West Exhibition and Sale at the Cowboy Hall of Fame in Oklahoma City, Oklahoma, Curt Walters will once again be a headlining exhibitor and unveil new paintings to the western art collector’s world.  The 50th Annual Prix de West Invitational Art Exhibition opened its doors on June 2nd but the most exciting part of the show’s two-month run will be on June 17th and 18th when art collectors from around the world are allowed to participate in the fixed-price sale and live auction.

Curt’s work, like in years past, offers the modern collector not only a beautifully captured contemporary view of our western landscape, but gives insight to a particular moment in time when the art was laid to canvas. The new paintings Curt offers this year not only hit this mark but give a deeper understanding of the place being captured. This insight resonates from each brushstroke, leaving the viewer with a sense of awe. 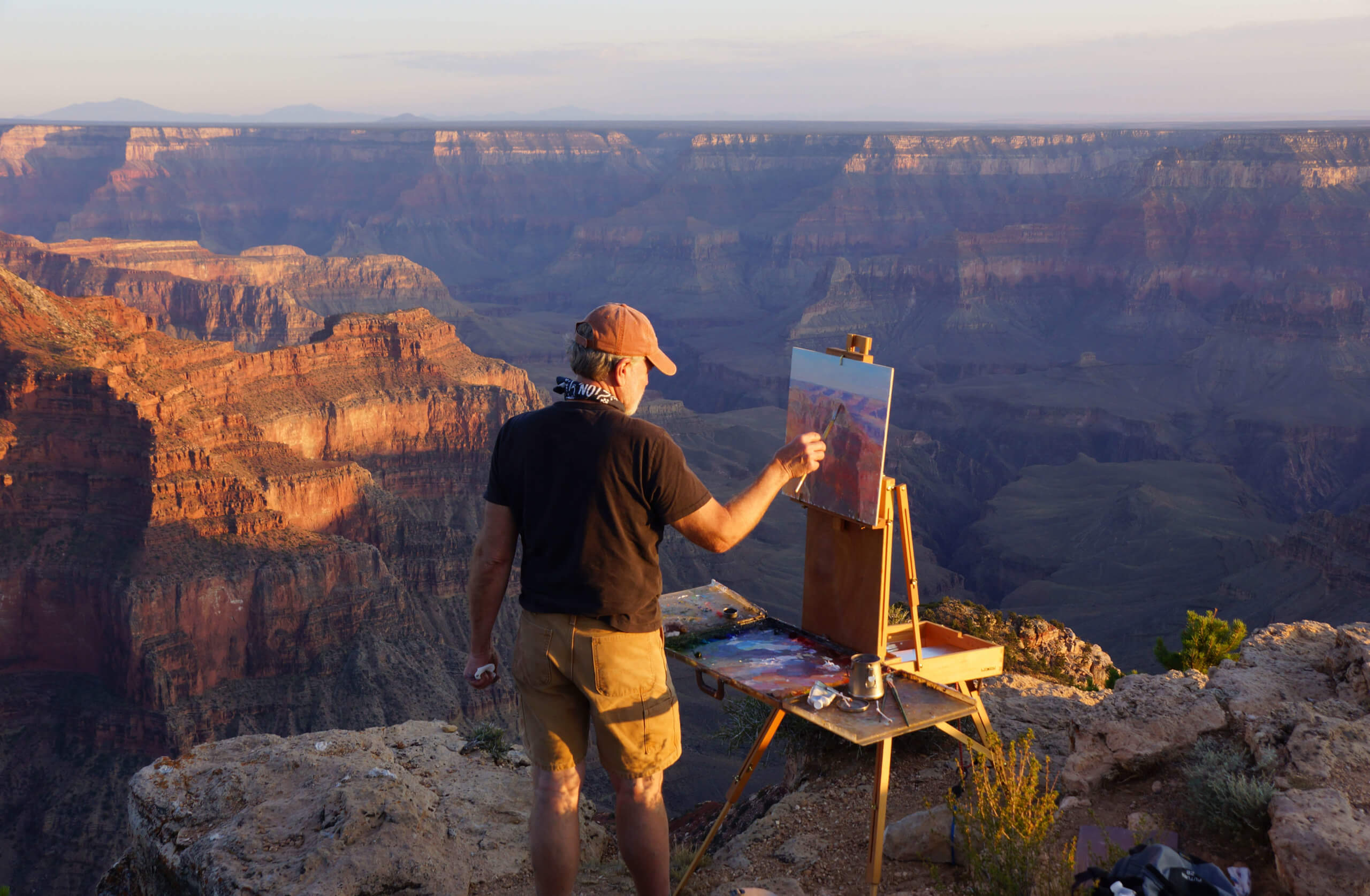 Shiprock (Navajo: Tsé Bitʼaʼí, “rock with wings”) features prominently in Navajo mythology, as the legend tells how a great rock bird carried the ancestral Navajos from the far north to their current homeland in the American southwest.

The thunderhead behind the monolith comes with a promise of rain after a long dry season. The cool blue of the sky represents an introspective journey, one of wisdom and a depth of understanding. Shiprock is a monument to stability, transcending the word of man. Inexorable Shiprock, then, stands as truth.

“I could see Shiprock as a boy growing up in La Plata, New Mexico, resulting in many youthful interpretations of this rock formation. For me, reprising this subject now is the most potent way I have to express my feelings about the world today and my place in it. The first Shiprock painting I sold, right after my 19th birthday, netted $15 whole dollars, which funded my first trip to Grand Canyon. That was the best $15 ever earned and spent.” 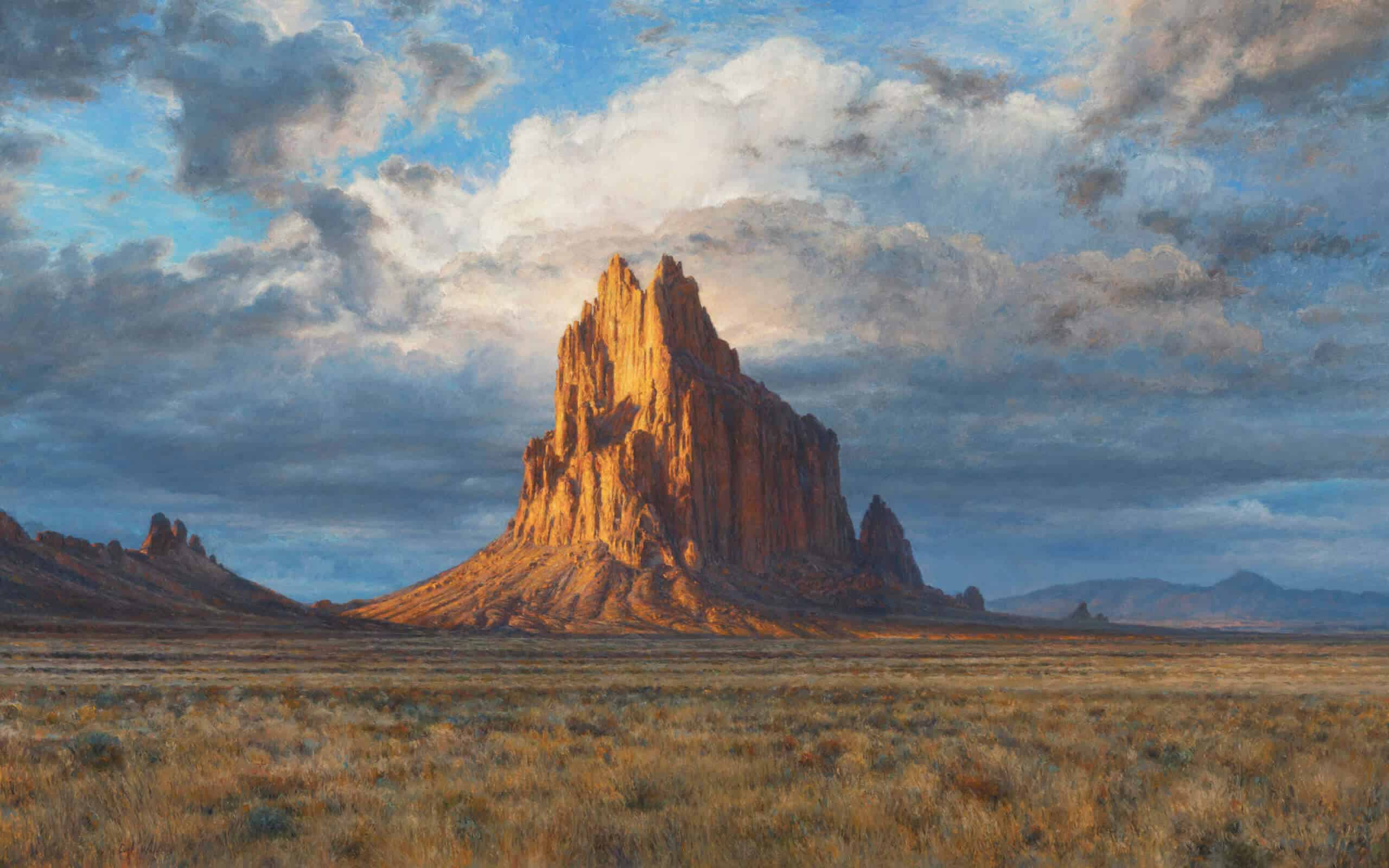 “There are many artists inside me. I called upon the spirit of my impressionist work in the mid-1990s and this canvas is filled with the impasto strokes, color and feeling of emerging from the depression of these Covid years.”

Many of Curt’s great paintings are scenes from near-by Oak Creek Canyon. AWAKENING depicts the great sycamore trees rising and protecting one of Sedona’s oldest homes while spring brings out the pink blooms of the young peach blossoms. 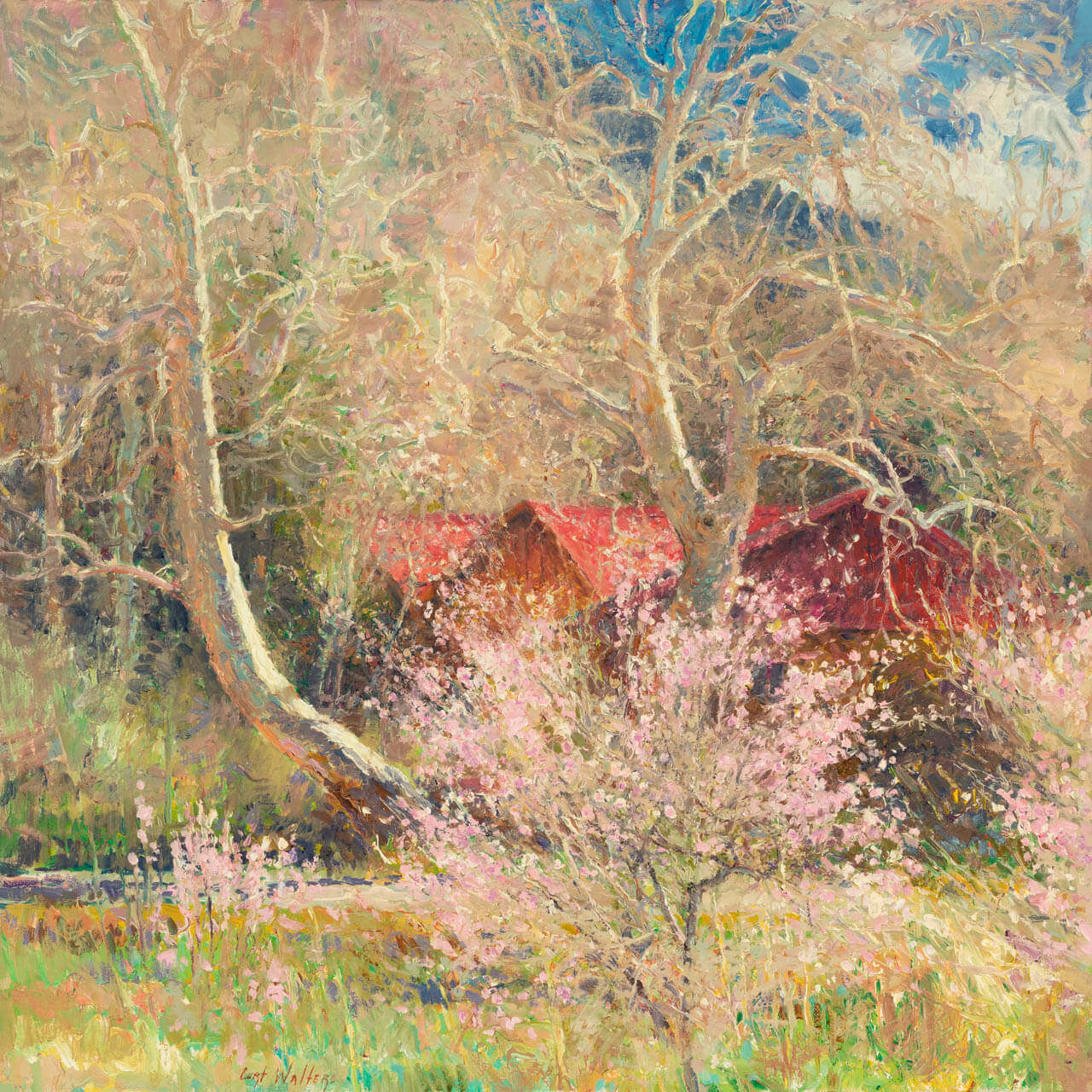 “At age 15 I was inspired by the panoramic image of Point Sublime by William Henry Holmes. This great drawing was included in Clarence E. Dutton’s 1882 publication “Tertiary History of the Grand Canon District.” I finally took my first jeep ride out the extremely rough and narrow 17-mile dirt road that traverses to this epic viewpoint in 1980. After the long ride I discover I had failed to pack my paint brushes, so I did a painting with Q-tips.

Point Sublime sits at the tip of a long promontory that juts southward into the widest part of the canyon, a finger pointing from the forested North Rim.  In 1873 Thomas Moran joined John Wesley Powell’s expedition down the Colorado River through the Grand Canyon. Many elements from this view inspired Moran’s great masterpiece “Chasm of the Colorado.”

“I have now painted many times at this point. It is my hope to paint a very large painting inspired by all my trips. Mencius Temple was named by geologist Clarence Edward Dutton in honor of Chinese philosophers and this western part of Grand Canyon is now referred to as the Eastern Cloister. The twin buttes of Mencius Temple and Confucius Temple rise 7,000 feet from the canyon floor. I understand the meaning of sublime when I am here, it is dizzying encounter. Mr. Dutton said it best “the most sublime and awe-inspiring spectacle in the world.”” 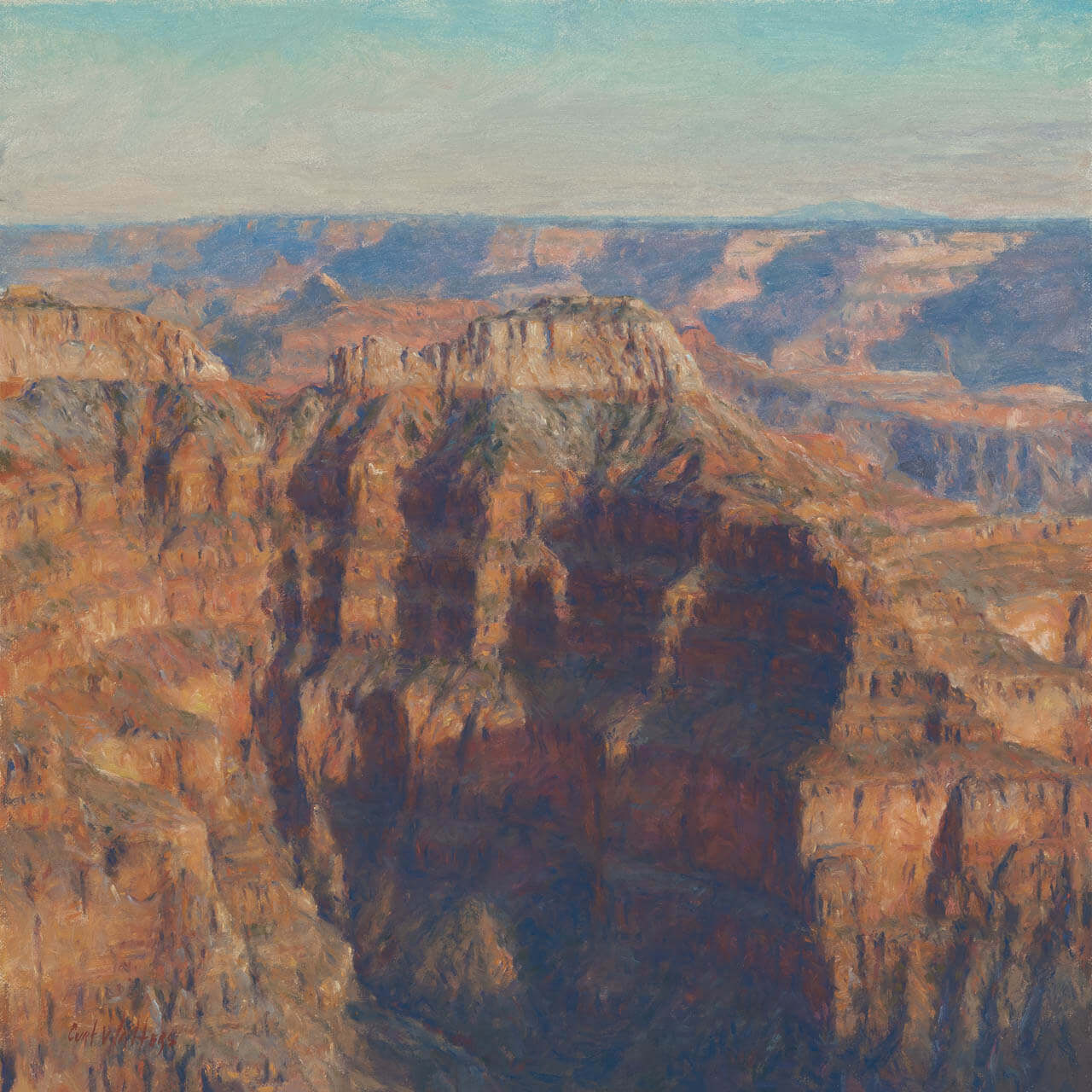 In 1539, Friar Marcos de Niza, a Franciscan priest, had reported to Spanish colonial officials in Mexico City that he’d seen the legendary seven cities of Cibola far to the north of Mexico. In 1540, Antonio de Mendoza, the first Viceroy of New Spain, appointed Francisco Vázquez de Coronado to lead an expedition north to explore and conquer the region.

That February, Coronado’s expedition departed from what is now the town of Compostela, inland from Puerto Vallarta on the west coast of Mexico, and headed north through the deserts and then following trails that parallel today’s border between Arizona and New Mexico. It was a medieval-looking army, made up of 350 European men-at-arms, Africans, and as many as two thousand Aztec warriors. It included 540 saddle horses for the caballeros, 960 pack horses and mules, and large herds of cattle, sheep, and pigs for the expedition’s commissary.

The second component of the entrada, carrying the bulk of the expedition’s supplies and under the leadership of Hernando de Alarcón, never made it to the destination. Due to a mistake in the geographical knowledge of the Southwest, the ships sailed via the Gulf of California north to the base of the Colorado River. The rapids of the Colorado made it impossible for the ships to travel further than a few miles north, leaving Coronado with no supplies.

On July 7, 1540, Coronado’s expedition reached Cibola (now the Zuni Reservation in western New Mexico). After the natives refused to allow him and his men to enter one of their villages, a fierce battle broke out; Coronado was seriously injured, but his men prevailed, and they occupied Cibola. Coronado soon appointed García López de Cárdenas to lead a force to locate and survey the large river far to the northwest. 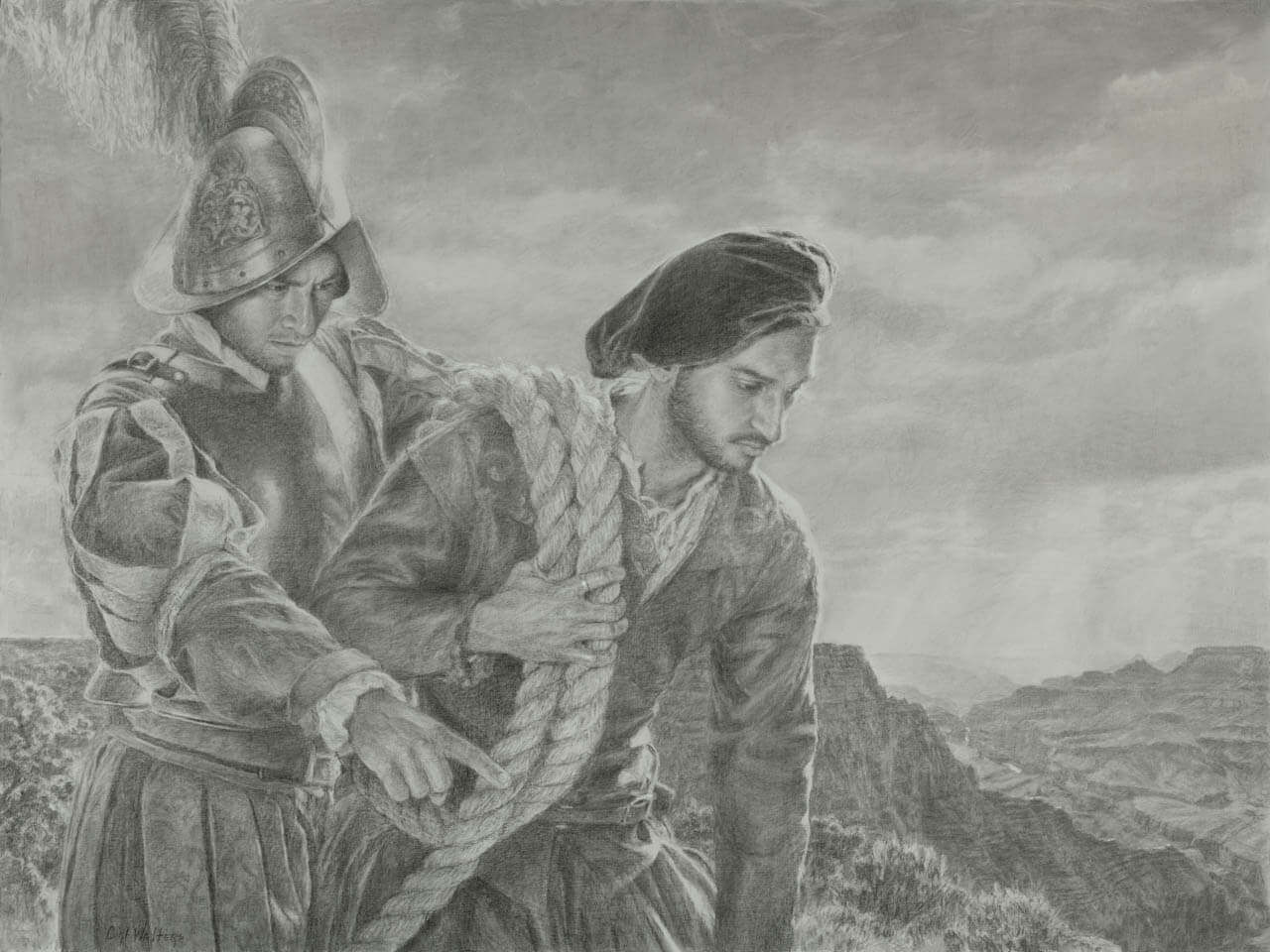 In his charcoal drawing CAPTAIN PABLO DE MELGOSA AND JUAN GALERAS: PLANNING DESCENT- GRAND CANYON 1540, Curt drew his models standing at the edge overlooking Grand Canyon near Lipan Point. Captain Melgosa is wearing a Morion style helmet and breast plate and Jaun Galeras has a rope over his shoulder anticipating a difficult route to the river.

Curt painted this view of Grand Canyon as a demonstration for the Prix de West Society’s trip to Arizona in October 2021.  From the South Rim behind the Bright Angle Lodge, Curt captured the dark shadow of Grandeur Point and the character of warm pinks and oranges of Zoroaster and Brahma Temples rising against the North Rim.

There will be a live auction following the sale on Saturday, June 18th, featuring this painting. 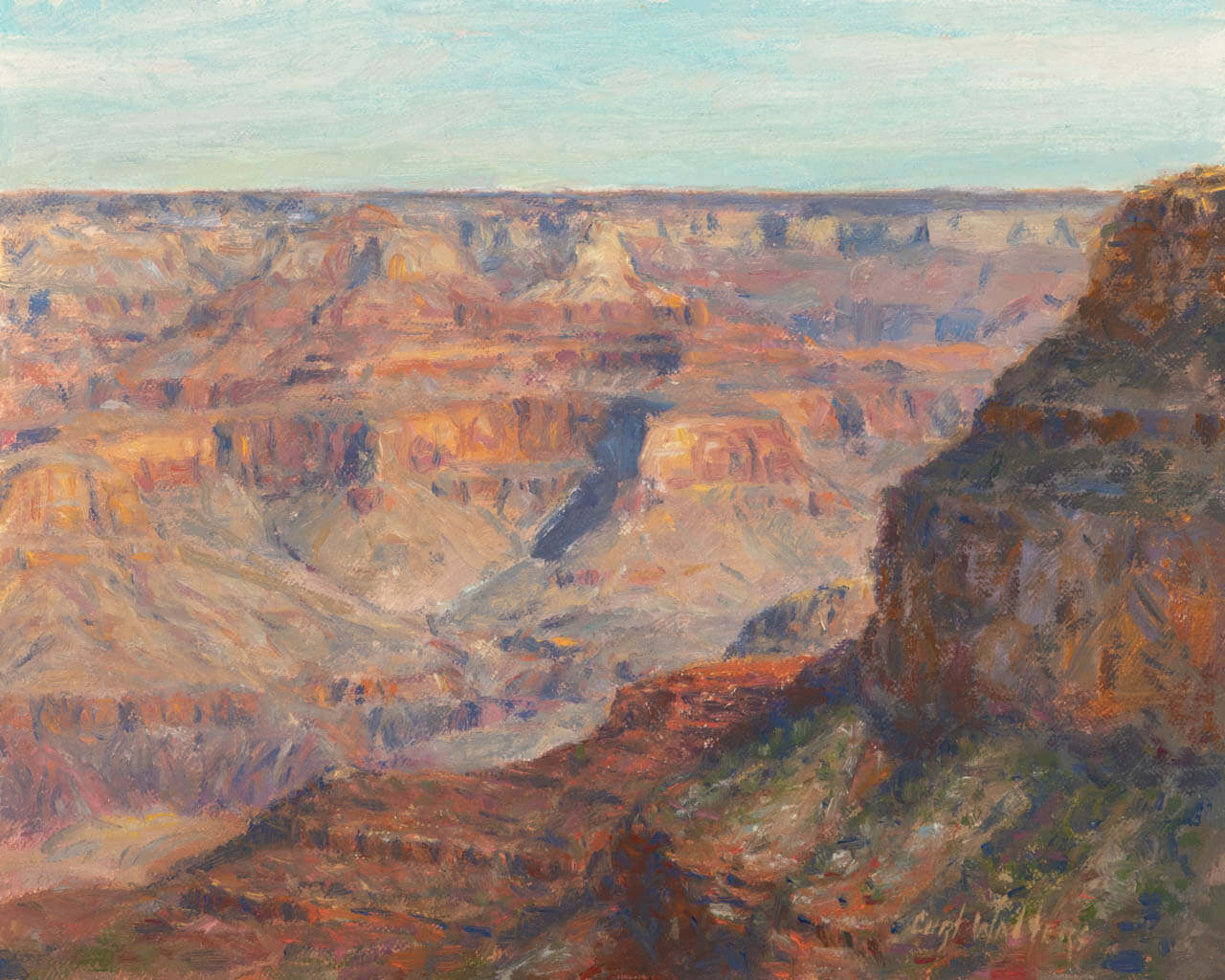