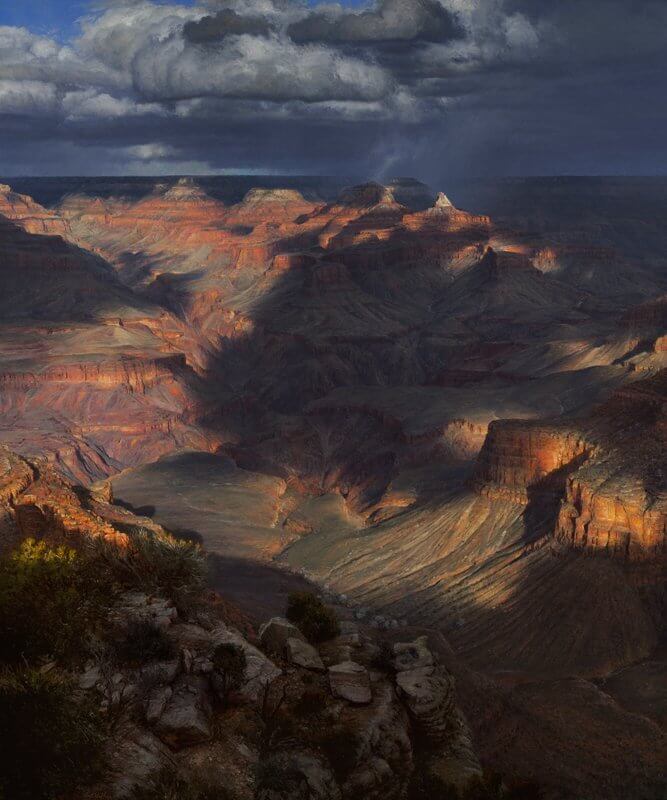 Artist Curt Walters, “Master of the Grand Canyon,” will return to the Prix de West invitational for his 15th year. The public show takes place at the National Cowboy & Western Heritage Museum in Oklahoma City, Oklahoma. The show begins June 8th, running through the 5th of August.

Walters’ centerpiece will be the 60″x50″ “Star of the Storm.” The artist says of the painting, “This last January, while hiking the rim trail near Maricopa Point, I watched a great storm rise above Grand Canyon. I was inspired to paint the scene later in my studio: a view looking Northeast into the abyss, overlooking the Bright Angel fault that created canyons on both the South and North rims. I felt that an extreme view like this, encompassing a five mile wide vista, would best explain the drama of the storm and the patterns of dark clouds playing on the landscape. It would also show the winter sun hanging low in the southwest, creating contradicting shadows.”

A second Grand Canyon painting will be on display, the 12″x12″ “Magic of New Snow.” Walters’ third piece, “After the Catch: Puerto Penasco,” 20″x30″, was painted at Rocky Point, Mexico.

The artist has also won the Trustees’ Purchase Award from the Masters of the American West show, and the Artist of Distinction Award from the Eiteljorg Museum’s Quest for the West. He’s received Patrons’ Choice awards from these and other shows, too, including the very first award offered at the Salmagundi Club’s American Masters exhibit in New York. Most recently, “Sun Shadow Wind” was inducted into the permanent collection at the Desert Caballeros Western Museum in Wickenburg, AZ.

After Prix de West, Walters will shift into high gear for the Quest for the West invitational in Indianapolis, Indiana, this September.

Walters’ work can be viewed in museums across America, including the Forbes Magazine Galleries, the National Cowboy Museum, The Eiteljorg Museum, The Autry National Center, Gilcrease Museum of the Americas, The Pearce Art Museum, Leanin’ Tree Museum and at the Grand Canyon National Park collection.

His work can be purchased at Trailside Galleries of Scottsdale, Arizona and Jackson, Wyoming, the Claggett/Rey Gallery of Vail, Colorado and the Nedra Metteucci Galleries of Santa Fe, New Mexico.